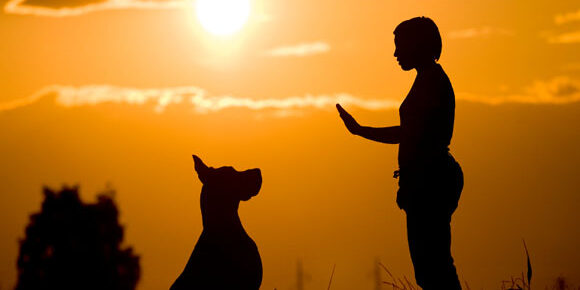 All dogs have a natural tendency to jump up on people. It’s their way of saying hello. We’re taller than the dog and they want to jump up to greet us, to get our attention. It’s a habit that begins at a very early age in a dog’s life. But it’s also a habit that can be changed. A grown dog who thinks he or she can jump up on every person is a dog who’s out of control. It could maybe have been considered to be a cute habit when the dog was puppy, but when that dog gets older and is now a thirty-to-ninety-pound exuberant puppy that puts his or her paws up on people, it’s no longer cute. And in fact, an older dog that jumps can be quite annoying, destructive even.

It’s important that the dog understands that he or she cannot jump up on people. There are numerous ways to teach the dog the appropriate behavior. One of the easiest methods to teach a young puppy is to simply grab the puppy’s paws, when it’s paws are on your legs, and lower the puppy to ground while saying the command “down”. When the puppy reaches the ground then pet the puppy, praise it. Repeat this process every time the puppy jumps and it will soon get the idea. When a dog is older, you can use the down method of lowering a dog back to the floor, but there are other ways—ways less invasive for dogs with whom you may or may not yet have a solid relationship (rescue dogs). Begin by standing in front of the dog. Say something to the dog that’s exciting, something that might get the dog’s attention enough to jump up. When he or she does jump, step back away from the dog and command the dog down. Do not pet the dog or praise it when it’s jumping up. When the dog’s feet touch the floor, pet the dog and praise it. Repeat this process over and over until the dog gets the idea. When the dog is reliably not jumping up, bring your friends—strangers to the dog—into the equation and have them teach the dog that they, too, are off limits.